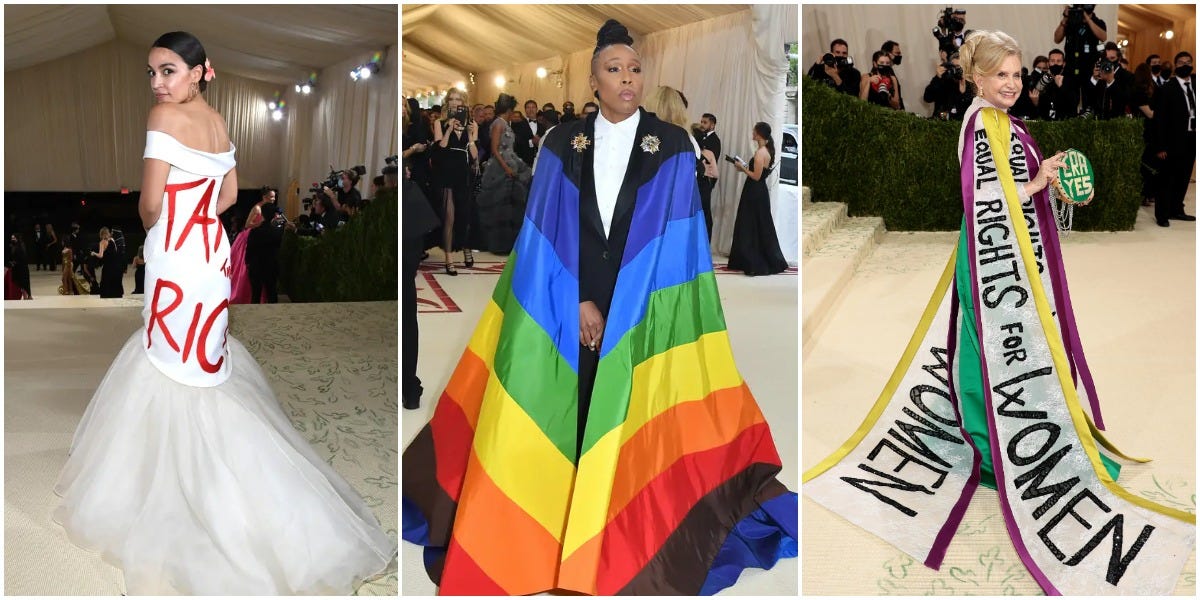 Political Fashion Statements Celebrities Have Made

The following year, Waithe and Pyer Moss designer Kerby Jean-Raymond wore bespoke suits with statements on the back.

Waithe’s periwinkle costume featured several homages to the LGBTQ+ community, Jean-Raymond told The Cut. The pinstripes consisted of the lyrics to the songs “I’m Coming Out”, “You Make Me Feel”, “We Are Family”, “Supermodel”, “Don’t Leave Me This Way”, “I Will Survive”, and “Take Me or Leave Me”, and the buttons featured the faces of queer icons like Grace Jones and RuPaul. The back of her costume read “Black Drag Queens Invented Camp,” in reference to the 2019 gala theme “Celebrating Camp: Notes on Fashion.”

Jean-Raymond’s stripes were made up of lyrics by rappers Nipsey Hussle, Tupac, Jay-Z, Nas, Drake, Meek Mill, Kendrick Lamar and J. Cole, and the buttons featured their faces. His suit read, “Fix your credit. Pool some money. Redeem the block.”

“We collaborated to really get a message across,” Waithe told E! News in May 2019. “For me, I really wanted to make sure my outfit represented the black drag queens who started this camp thing about being on top and all that jazz.”

The Egyptian Daily | The SIU takes Hollywood by storm: the alumni are making their mark in showbiz