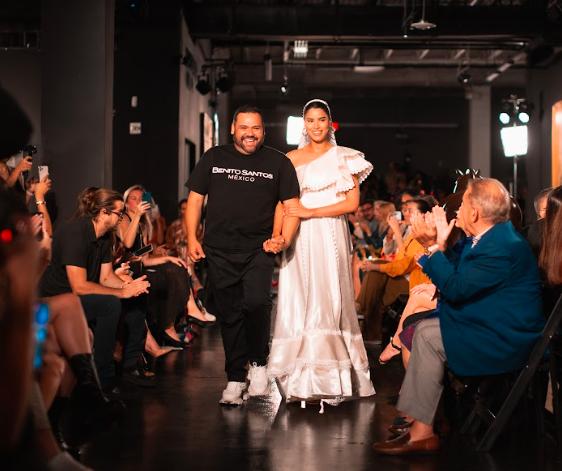 While Eurocentric beauty has been the norm for far too long, Miami Fashion Week (MIAFW) is making a name for itself with its own style. The focus here is on relevance, with the aim of stimulating and expanding the fashion market in Latin America.

After a two-year hiatus, the 22nd edition of Miami Fashion Week kicked off on Tuesday, May 31, 2022 and concluded on Sunday, June 5, 2022. Beyond the runway, the week-long event wrapped up extended to a mix of fashion, beauty, music, art, charity, latest trends, food, luxury and lifestyle, bridging the gap between Latin America and the United States.

Making its mark on the fashion scene isn’t all MIAFW has in store; it’s the first global fashion week to connect the physical fashion industry with web3’s digital designers and brands.

When it comes to diversity, MIAFW is unlike any other fashion week in the world, but it has its own taste, especially when it comes to resort wear and the Latino community. According to Lourdes Ferdnadez-Velasco, executive general manager of MIAFW, Miami’s difference is that it serves as a gateway to the Americas.

“Since I took over as Executive General Manager of Miami Fashion Week in 2016, Latin American fashion has grown tremendously. There is a huge Latin X movement in Latin America that has exploded in popularity. We have great fashion designers from Latin America who are creating waves all over the world. It’s been extremely intriguing for us. At first it was a bit difficult, but now it’s just the opposite,” says Ferdnadez -Velasco.

On Tuesday, May 31, Ferdnadez-Velasco, spoke at a press conference about MIAFW’s ambitions to enter the Metaverse with the introduction of “L’ATELIER BY MIAFW”. “L’ATELIER BY MIAFW”, a revolutionary digital retail and education concept, will bring together fashion enthusiasts from around the world in the metaverse to learn about sustainability, discover the latest fashion trends and create a creative community to promote the industry.

Missoni brought the brand’s signature style to Miami with a variety of contemporary and vibrant styles from its Women’s Summer 2022 ready-to-wear and swimwear collections. t-shirts were effortlessly layered over swimsuits, emphasizing the sinuosity and harmony of the female figure. Marc Anthony and RHOM Guerdy Abraira sat front row, while celebrity model Nadia Ferreira wowed the crowd on the catwalk.

Santos’ distinct aesthetic wowed guests as models roamed the gallery in her dazzling creations. His designs underscored why he is considered one of Mexico’s most desirable designers and a favorite of South American celebrities.

The architect and designer, who was born and raised in Venezuela, is considered one of the world’s most exceptional designers and a celebrity favorite. Her style at MIAFW highlighted her well-known love of highly structured, contemporary and feminine architectural forms.

International art collector Gary Nader has a particular interest in Latin American art. The Lebanese-born, Dominican-raised art collector is considered one of the most successful gallerists in the United States and Latin America, and is known for owning the largest Fernando Botero collection in the world. During MIAFW, he discussed the importance of combining fashion with art.

“Most of the world’s major museums now present hugely successful retrospectives of fashion icons, and we are doing the same, creating a platform to bring together Latin America’s most influential designers on the front of the scene. Plus, as they did with Oscar De La Renta, Georgio Armani and Alexander McQueen, we’ll be showcasing their retrospective work in the future. These shows are currently innovating. Many artists have criticized me, claiming that what I do is not art. But for me it is, and for many others it is too. I make no apologies for the way we do art at the Gary Nader Center,” Nader says.

Rene by RR Show at the Gary Nader Art Center

Rene by RR, which debuted at Miami Fashion Week in 2018, fills a niche in the luxury market with a collection that not only shows its capability and high quality standards, but also a city and a culture. which are gaining momentum as a future global fashion. Capital city. The guests had the pleasure of witnessing and participating in the progression of the René brand, which ended with a standing ovation.

Her bold and colorful patterns have made her one of the most well-known designers both in the United States and abroad. Guests enjoyed dancing and singing along with her magnificent presentation, marveling as each of her beautifully crafted pieces parade down the runway accompanied by the most incredible works of art.

At Decentraland, MIAFW held a virtual fashion show showcasing digital clothing from a collaboration between DRESSX and MTA Kollectiff. Guests were able to explore the virtual building and discover the world of AR fashion, which was hosted within “L’ATELIER by MIAFW”.

L’Atelier by MIAFW is NFT’s first members-only club dedicated to the fashion industry, giving designers, models, stylists, photographers and fashionistas access to a place where they can create, innovate and form a community that prioritizes sustainability.

Closing brunch and round table at the Seaspice restaurant

Lourdes Fernandez Velasco, Executive Director of MIAFW, led a panel discussion at Seaspice on the future of digital fashion and sustainability to wrap up the week.

Ferdnadez-Velasco adds that applications for next year’s MIAFW are currently open. “There are so many amazing brands in Latin America that we can’t wait to develop even more amazing programs. In 2016 when I joined, we had to rely more on European brands since Latin America was not there yet, but in recent years that has changed and many of these brands are sustainable. Ferdnadez-Velasco continues: “Fashion in Latin America is about sustainability. Because sustainability has been one of our foundations since our inception, being able to collaborate with those brands that try to incorporate it in some way allows us to be more authentic in what we try to do.