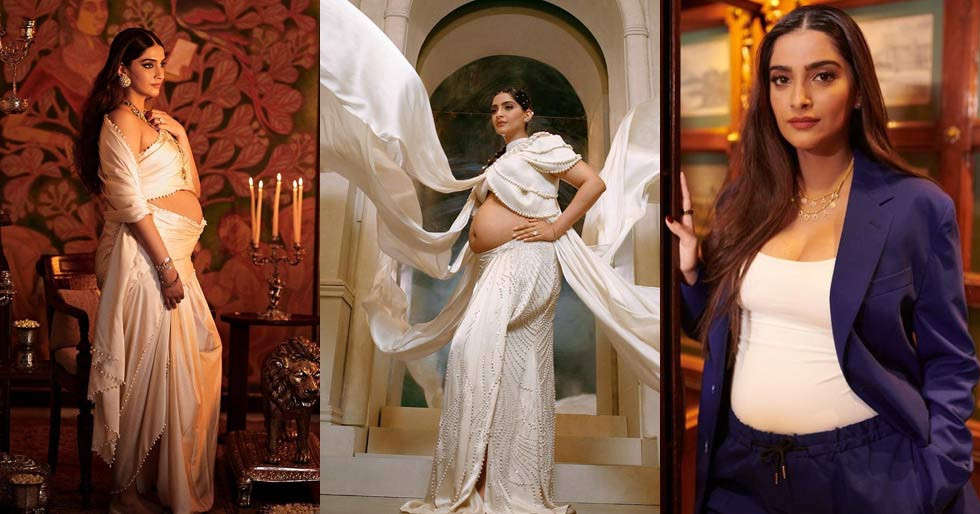 How Sonam Kapoor changed the rules of maternity fashion

Sonam Kapoor Ahuja is undoubtedly one of the hottest celebrities. The Bollywood diva has made waves not only for her acting skills in films like Aisha and Neerja, but also for her looks at every occasion. And she doesn’t always need a catwalk or a red carpet. As the actress celebrates her birthday today, we take an admiring look at her latest offering to the fashion world: her game-changing pregnancy looks.

Sonam Kapoor birthday girl is currently in her third trimester and is due soon to deliver her first baby with husband Anand Ahuja. During her pregnancy, the actress dropped stunning looks while flaunting her baby bump. Needless to say, she did it in style. In one of her recent photoshoots, she wore a sheer black kaftan dress with lace detailing. While fans couldn’t help but draw parallels to Rihanna, Sonam owned the look with kohl-rimmed eyes and her signature style. This is just one of her much talked about looks.

In an April photoshoot, Sonam Kapoor, who will turn 37 this year, imitated Bollywood royalty in a beaded ivory silk saree. The mum-to-be looked ethereal with the saree draped over her baby bump. The look reportedly had a personal touch as the actress wore her mother’s Polki jewelry which became the centerpiece. It all comes straight out of a painting.

As Sonam Kapoor recounted the phases of her growing baby bump, she also gifted fans with photos of herself with Anand Ahuja. The actress shared photos of herself wearing a white dress as she posed with Ahuja who looked very enamored with the diva as usual. In March, Sonam also served as style inspiration for working moms everywhere in a chic blue pantsuit. She killed the business casual look.

In her latest photo shoot, Sonam looked divine in a satin ensemble adorned with sequins and beads. The layered look with long trails is the ultimate celebration of maternity fashion.

Sonam Kapoor tied the knot with Anand Ahuja in May 2018. The two are expecting their first baby and were recently in babymoon in Italy.

On her birthday, here’s a look at some of her jaw-dropping pregnancy fashion moments: 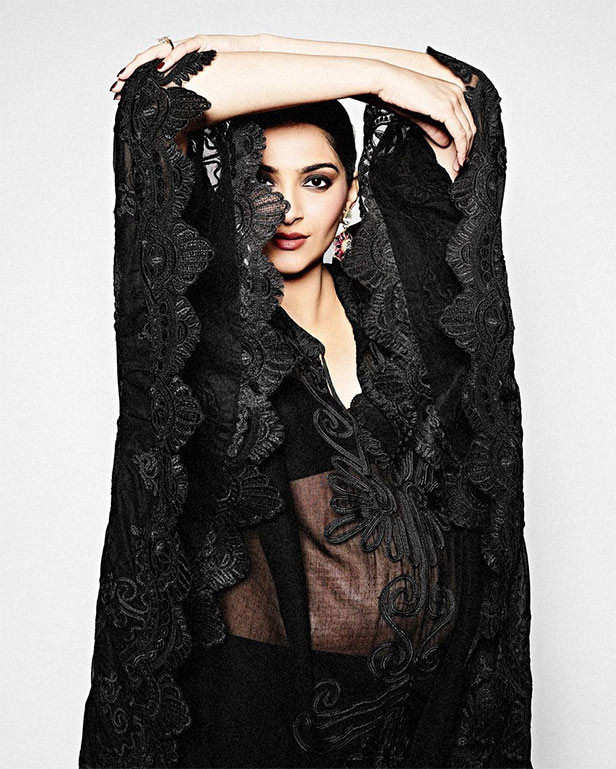 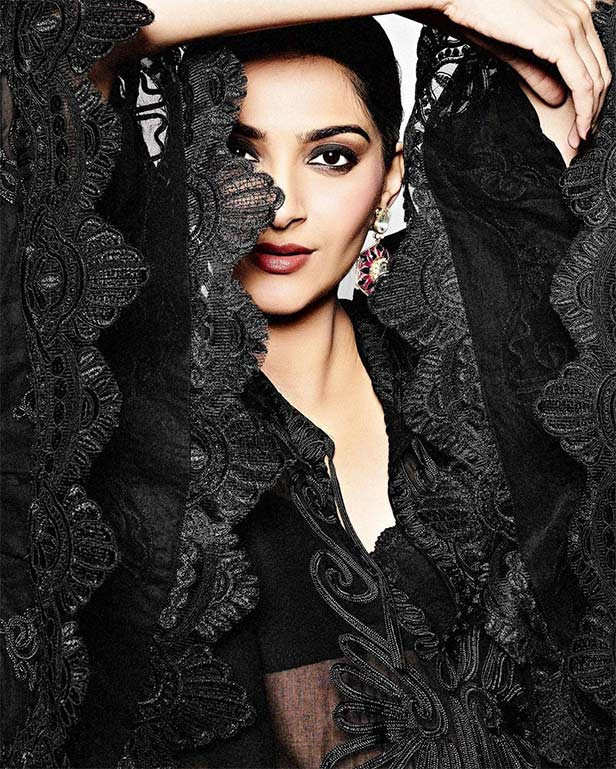 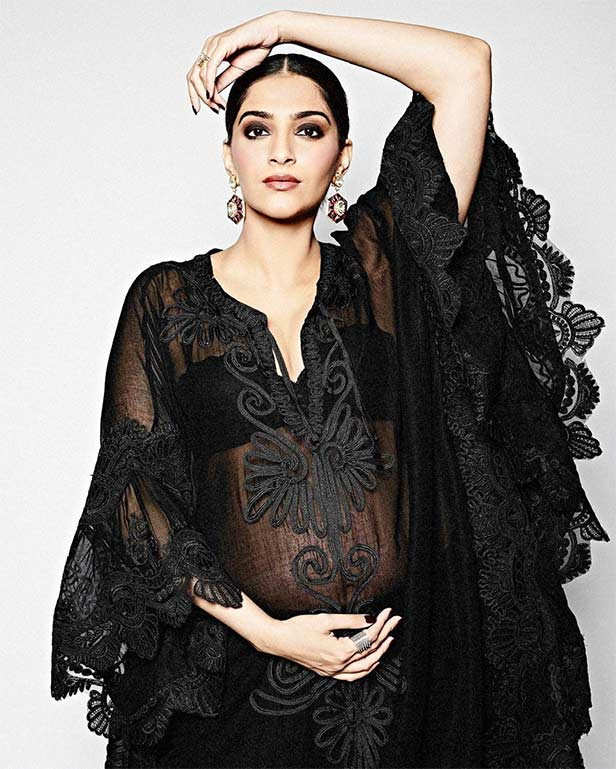 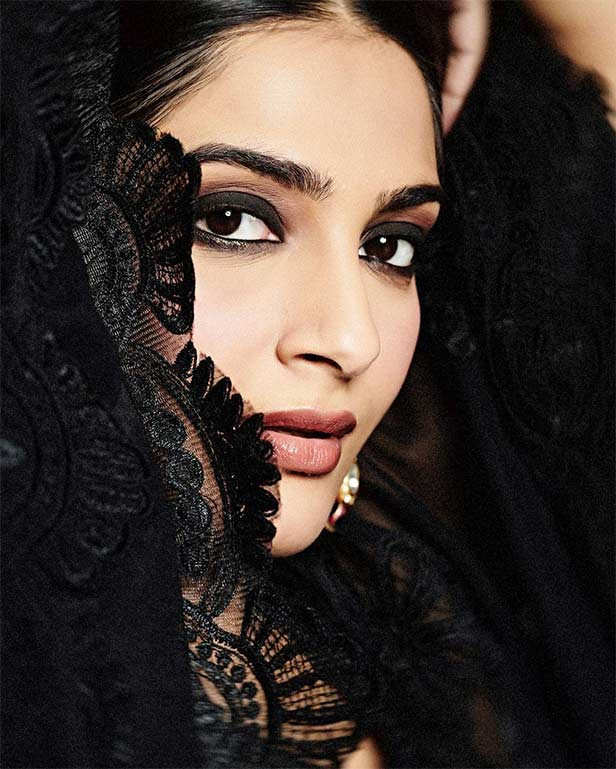 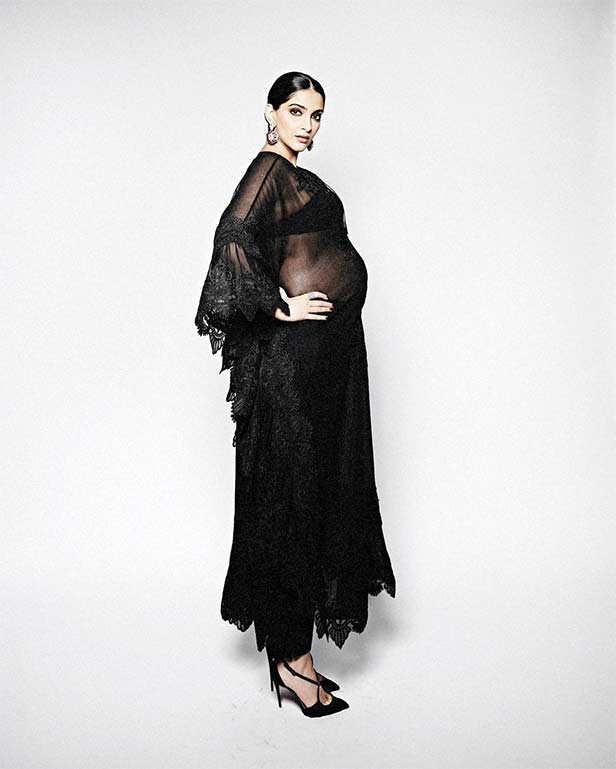 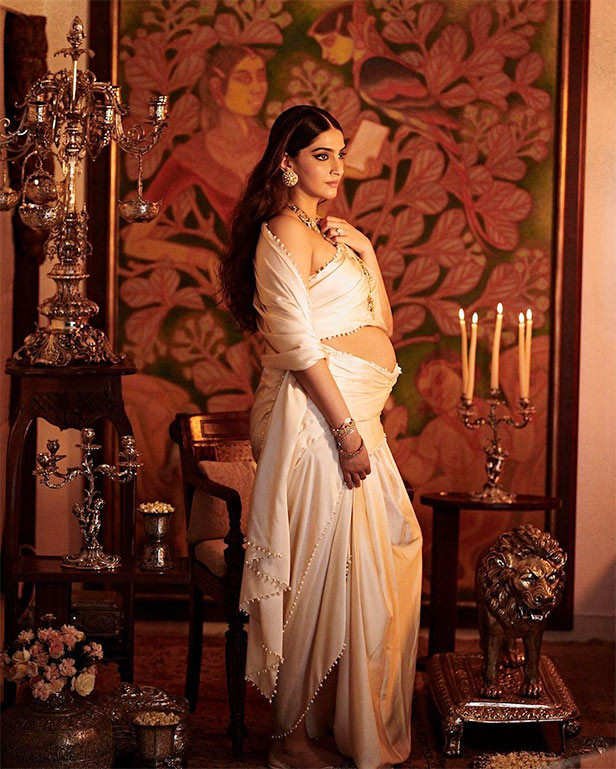 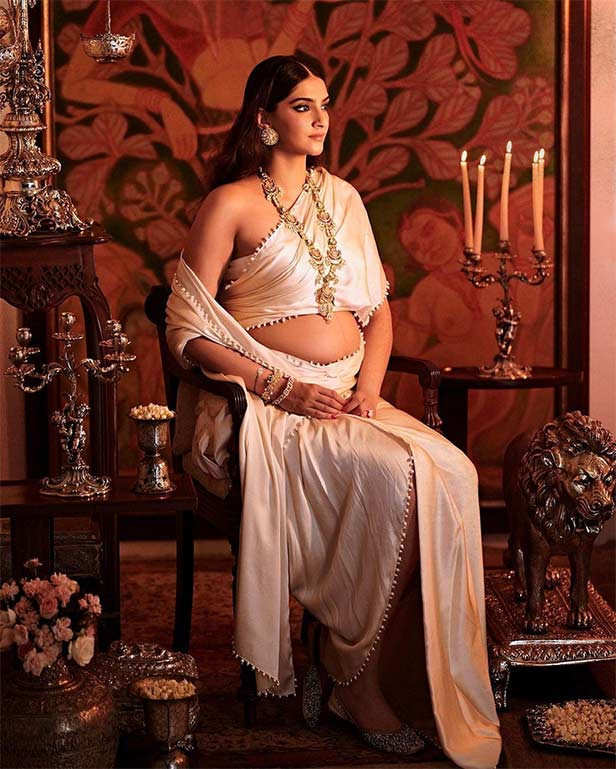 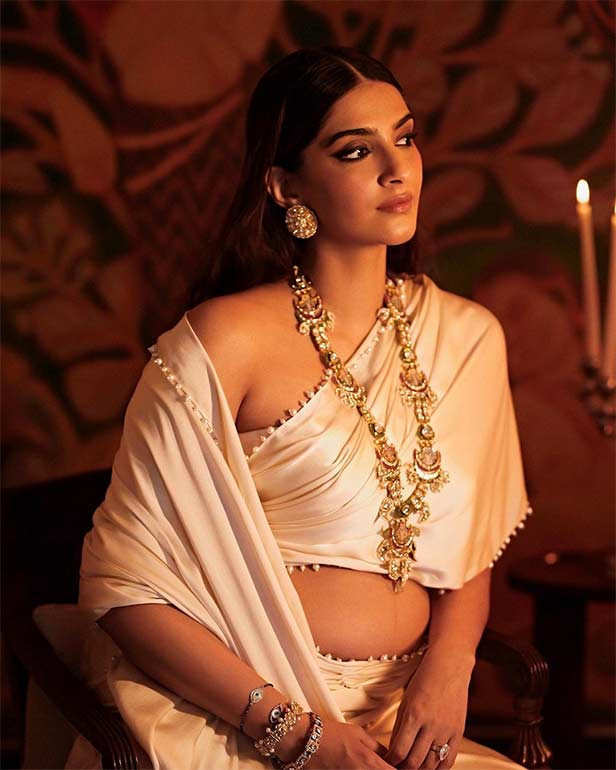 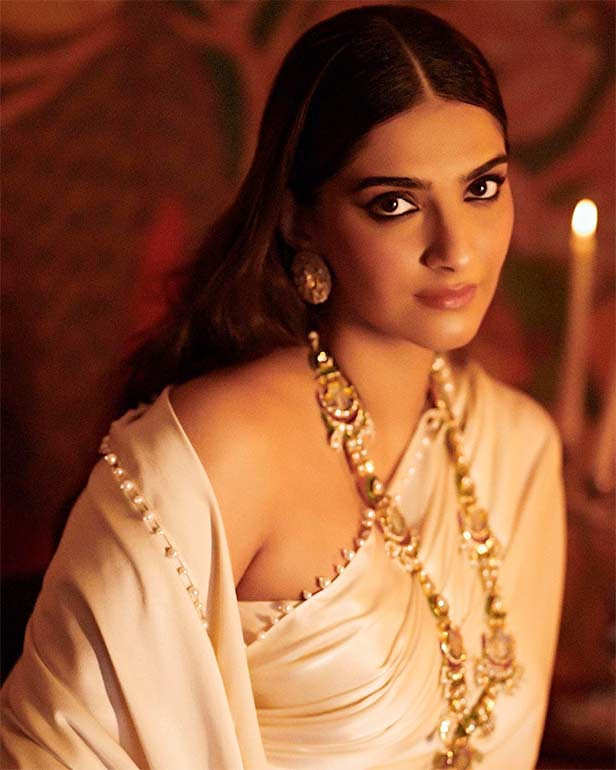 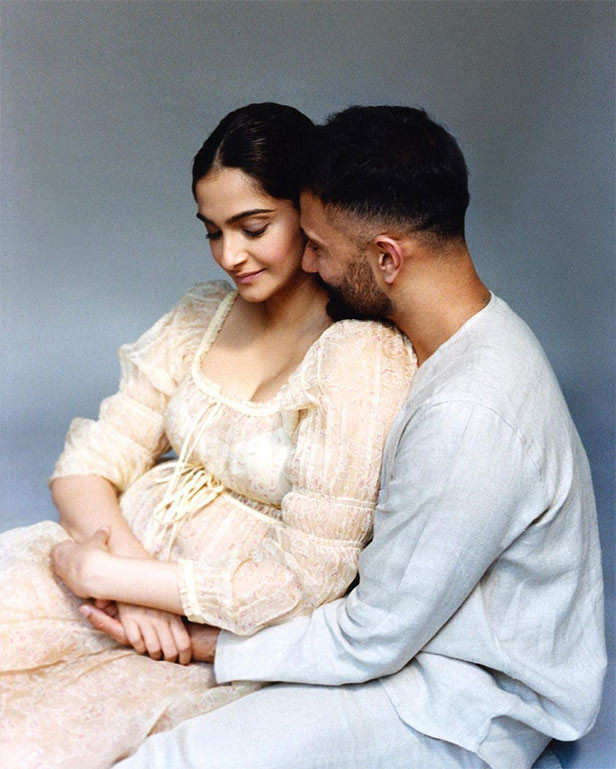 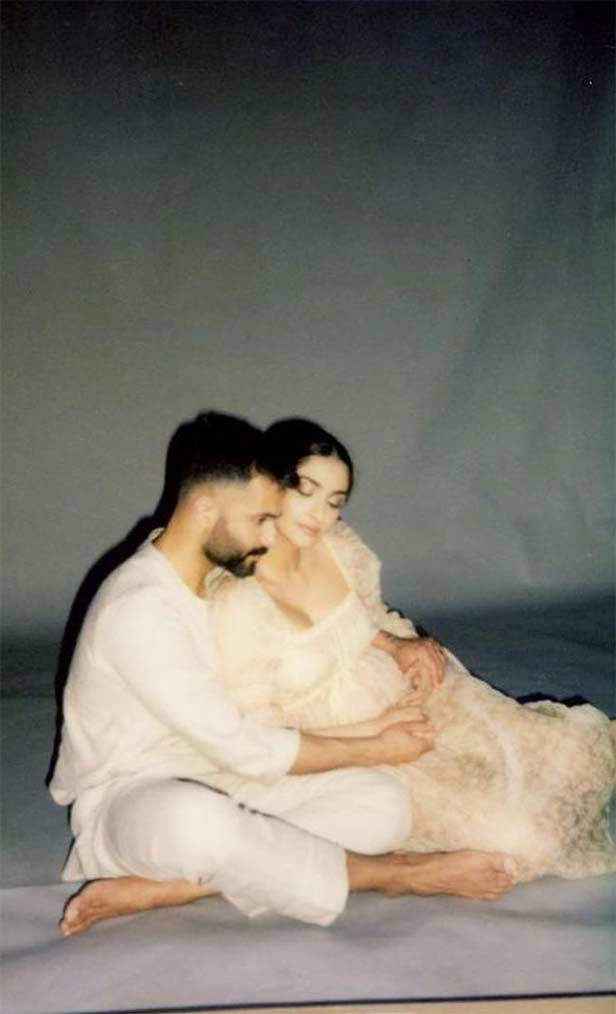 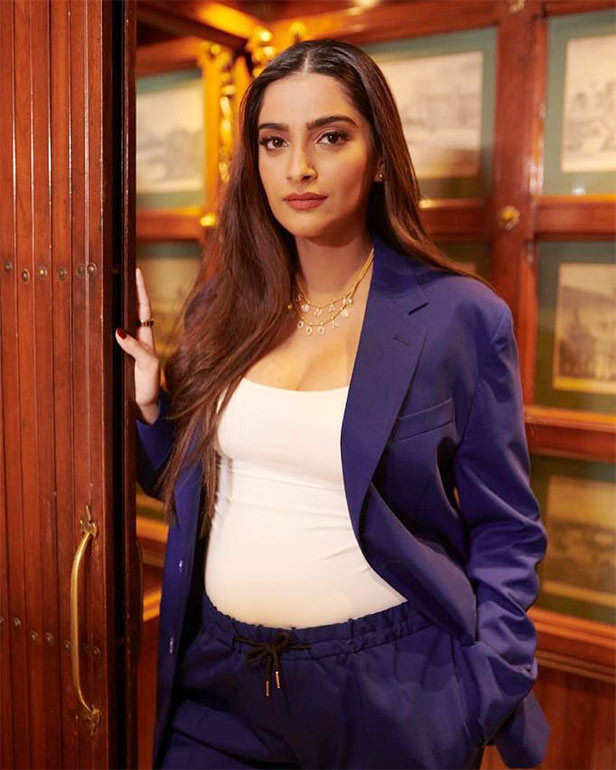 how celebrities and influencers drove our modern obsession with shapewear

Let’s take a deeper look at her luxurious lifestyle in 2022!