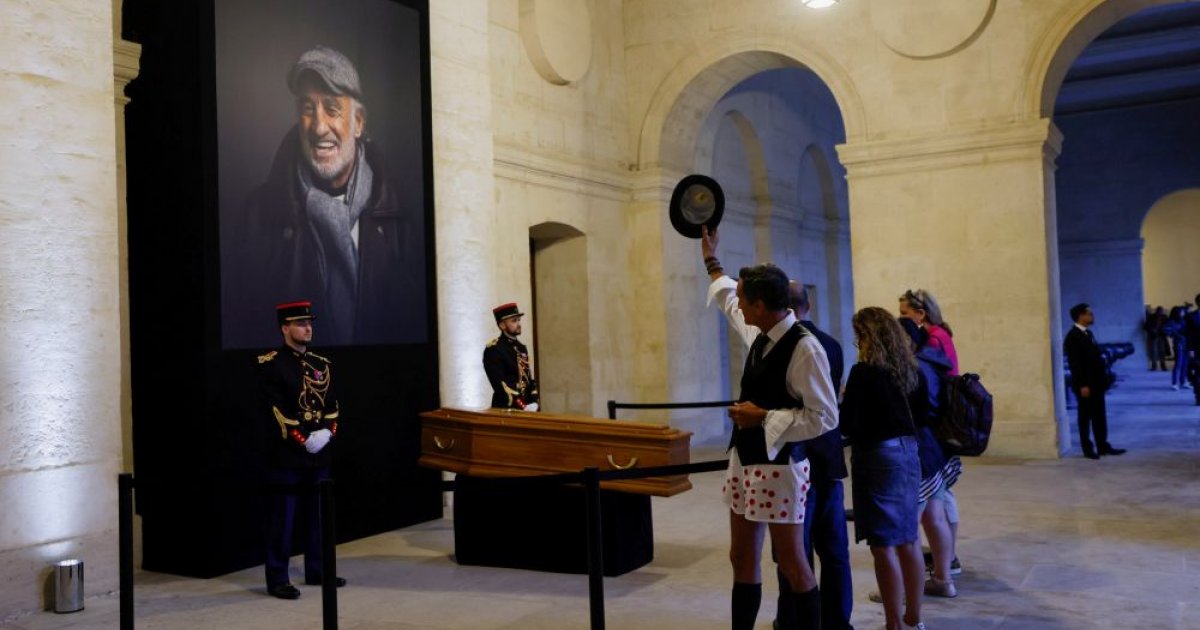 PARIS, September 10 – Thousands of people gathered in Paris on Thursday to honor Jean-Paul Belmondo, the cinema icon who helped define French identity for six decades, with President Emmanuel Macron bidding touching farewell to the star passed away this week at the age of 88.

France is bereaved by the death of Belmondo, legend of New Wave cinema and action films.

“We love Belmondo because he looked like us,” Macron said during a ceremony at the Invalides in Paris. “Dear Jean-Paul, to lose you is to lose a part of us.”

It was a rare honor for an actor, placing him alongside the great statesmen and artists in French history.

The last time such a tribute was paid was for former President Jacques Chirac in 2019.

Among the celebrities, politicians and sports stars present at the ceremony were some of his French screen successors, Marion Cotillard and Jean Dujardin.

Thousands more gathered outside to watch on giant screens set up for the occasion, and then lined up to walk past the coffin, draped in the tricolor.

“It’s important for me to be here,” said Brigitte Ratou, 66-year-old retiree, one of the first to arrive on Thursday.

“It’s like saying goodbye to an old mate, someone who’s been around since I was a teenager.

Another fan, 52-year-old civil servant Denis Vandevyvere, had come from Belgium to pay tribute to his hero.

“He was a great gentleman,” said Vandevyvere, who collected 2,500 pieces of memorabilia related to Belmondo, known simply as “Bebel” in the French-speaking world.

The funeral will be held with close family on Friday.

Belmondo first rose to fame as part of the New Wave cinema movement with films like Breathless and Pierrot le fou by Jean-Luc Godard who helped define French cool in the international imagination.

He has become a household name, appearing in 80 films spanning a multitude of genres, including comedies and thrillers.

Belmondo was also often called The magnificent (The Magnificent), after a 1970s secret agent satire in which he starred.

At the Deauville American Film Festival, which is currently taking place in northern Calvados, seasoned director Claude Lelouch paid tribute to the star.

“If there was one thing he liked, it was standing ovations,” Lelouch, 83, said at the premiere of his new movie.

“So we’re going to give him a standing ovation.” This one is for you, Jean-Paul! – AFP