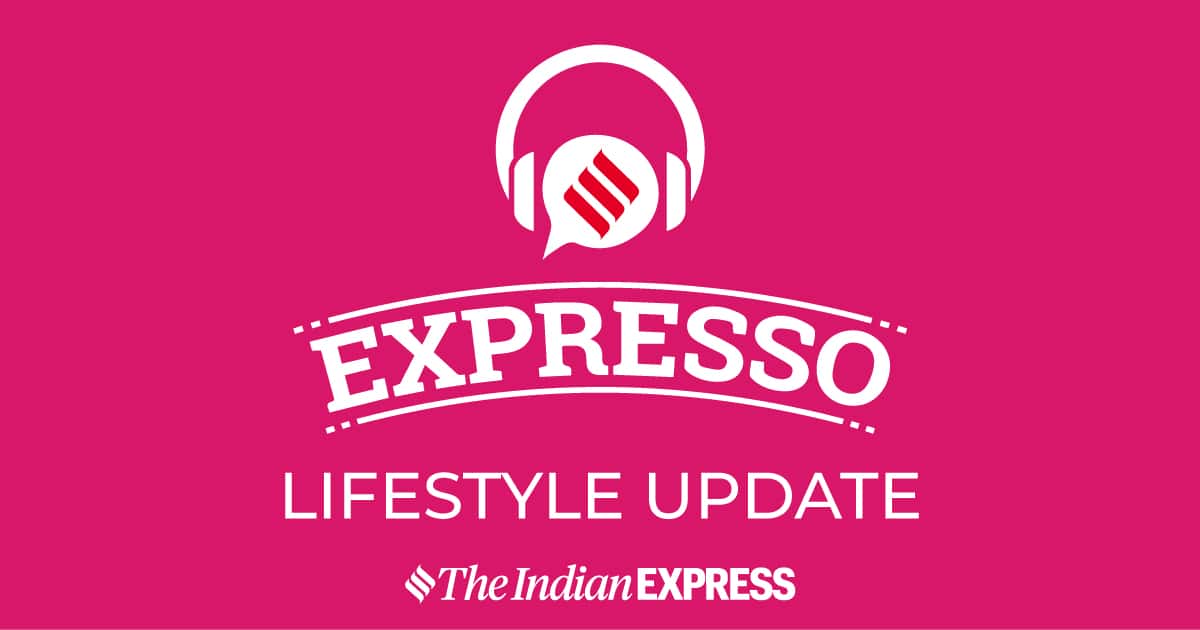 You are listening to the Expresso Lifestyle update. Here is the latest lifestyle news brought to you by The Indian Express.
“Let’s start with an update on Sanya Malhotra’s workouts.

Exercises that help strengthen the core are an integral part of many workout routines. These are important because a strong core also forms the basis for performing all exercises correctly. So, on Instagram, Sanya Malhotra’s fitness trainer, Tridev Pandey, recently shared a glimpse of the Meenakshi Sundareshwar actress working on her core strength and wrote, “@sanyamalhotra_ don’t sweat, she sparkles. Bodyweight training with sliders for core strengthening and balance,”

He also mentioned that she used sliders as part of her home workout.

For the uninitiated, sliders are discs that are pressed and pushed across the floor, and they, in turn, release tension on the practitioner. ”
“Meanwhile,
Yoga has been proven to have tremendous health benefits, both mental and physical. From improving posture to building flexibility, yoga, if it’s an integral part of your life, can bring about a colossal amount of change.

Malaika Arora, a well-known fitness enthusiast, took to Instagram to talk about three yoga poses or asanas to awaken the “warrior” in you. According to the actor, “You’re a warrior if you keep fighting when everything about you makes you want to give up. Be a warrior, not a worrier.”

Wondering what those poses are? These are Adho Mukha Svanasana, Virabhadrasana II and Balasana.
” Let’s move on,

Kriti Sanon is the latest celeb to endorse the idea that a good workout can take place even outside of the gym, as long as one is dedicated and willing to stick to his schedule . This is something that fitness enthusiasts have been insisting on for a while.

In the midst of a busy work schedule, Sanon, currently in Ladakh, made sure to pump herself up by doing high-intensity squats using rocks.

She was joined by her trainer Karan Sawhney, with whom she had posted other workout videos, and they demonstrated squats using rocks for weight. They held their weight while holding the rocks in their hands, and in another part of the video they were seen attempting squat jumps.
“Milind Soman takes his fitness routine so seriously that not a day goes by that he doesn’t get exercise that helps him stay active. Even when traveling, the actor and model makes sure to doing his daily push-ups no matter where he goes.

Soman was seen doing push-ups on a boat that was cruising the mighty Brahmaputra River in Guwahati. He wrote: “What an inspiring vision! Nothing is more powerful spiritually than a river or a mountain, whatever the distraction around, in front or behind! ”
“Meanwhile,

Fans are eagerly awaiting the 75th annual Cannes Film Festival as several Indian actors including Deepika Padukone, Aishwarya Rai Bachchan, Tamannaah Bhatia among others are expected to make an appearance at the event.

Deepika, who is part of the competition’s jury, recently made her first official appearance at the jury dinner in Cannes looking better than ever.

For the evening, the actor opted for a sleeveless Louis Vuitton mini dress decorated with red, blue and gold sequined vertical stripes. She teamed the look with a pair of brown heeled boots.

Accessorizing the look with a Cartier watch and a Louis Vuitton handbag, she completed the look with hair styled in beachy waves and minimal makeup.
“Vibrant, edgy styling, experimental cuts and sultry silhouettes – fashion at the recently concluded 2022 Billboard Music Awards was definitely one to watch. Dressed in unconventional yet stunning outfits, celebrities showed off their best fashion on the red carpet .

Take Kylie Jenner, for example, who made a dazzling appearance in a figure-hugging gray long-sleeved gown by Balmain. With her hair tied up in a sleek bun, she accessorized the look with some chunky gold bracelets.

Doja Cat was one of the best-dressed celebrities on the red carpet. She slipped into a black Schiaparelli haute couture dress with a velvet corset top and a fitted skirt bottom. . Trendy earrings and black and gold heels complete her look.
“Meanwhile,

A perfect balance of subtlety and glamor with a hint of punch, Kiara Advani’s style choices are ones to watch. From safe ethnic cuts to experimental clothing choices – the actor’s choices have evolved over the past few months, and how! As such, when she stepped out to promote her upcoming release Bhool Bhulaiyaa 2, we couldn’t help but admire her refreshing and glamorous avatar.

Perfect for the scorching summer season, she recently draped a floral saree by designer Varun Bahl. The easy-to-wear saree was paired with a matching strappy blouse with a plunging V-neckline. Styled by Lakshmi Lehr, she accessorized the look with pastel blue jhumkis and tied her hair in a ponytail.
‘A 31-year-old editor’s seven-layer lemon Swiss roll and amaretti trifle beat 5,000 desserts in a UK-wide competition to become the Queen’s official Platinum Jubilee pudding .

Melvin, from Southport in the North West of England, said his creation was inspired by both his grandmothers and the Queen.

“My grandmother taught me how to cook, she taught me all the elements, everything from scratch. Her signature dish was always a trifle.”””
“To finish,

While giving an interview to YouTuber Ranveer Allahbadia, actor Shahid Kapoor talked about being driven in life and where he gets it from.

He said, “Being motivated only benefits yourself; find it wherever you can and run away from self-pity as fast as you can because the only thing it does is absorb you into a negative emotion where you blame everything but learn how to make a change inside “,

The Kabir Singh actor said he was motivated by the people around him. He has shared the ages of his respective family members including his wife, brother, children and father who belong to different age brackets and this is where he gets his motivation.